To subscribe (or unsubscribe), enter your email address in the box to the right...

We were sad to have to say goodbye at Christmas to Olivia Shotton, our Director of Music, who guided us through the COVID lockdowns and introduced us to a lot of new music, much of it unaccompanied. Her increasing pressure of work in London has led to her having to stand down, but we were glad to have played a small part in what we are sure will be a stellar conducting career, and we wish her well for the future.

Olivia’s last concert with us was a programme of readings and carols at Sedgewick House, which equally sadly was our last in this lovely venue as its owner has decided to sell the property. We once again managed to fill all the available space and give our audience a hefty dose of Christmas cheer.

Although she was with us for only two years, Olivia made a strong impression on the choir, and we are all much better for it. She got us singing in the open air when it was allowed during the pandemic, and ensured that we were one of the first local choirs to put on a performance after lockdown. Under her baton we completed a full 12 months of singing and performing some very good concerts. She lowered our average age (and made some of us feel a lot younger!) which her successor will continue to do and she certainly put a more youthful face on the choir.

Olivia’s successor, Timothy Peters, also graduated (as she did) with an honours degree in music from Sheffield University. He too is an accomplished conductor, as well as a talented tenor and composer. Last year he was appointed Fellow of the National Youth Choirs of Great Britain and also as Musical Director of Surrey’s LGBTQIA+ Choir, Surrey Rainbow Choir. He is first and foremost a conductor of chamber choral music, but has also worked with larger ensembles, such as when he led two hundred and fifty singers from four choral societies in a performance of his composition The Golden Hour in Sheffield Cathedral, a piece commissioned by Classical Sheffield in 2019.

He has been featured as a soloist on BBC Radio 4 and regularly performs for choirs and orchestras around England including the Exon Singers, Hallam Choral Society and Hallam Sinfonia, Bakewell Choral Society and South Yorkshire Symphony Orchestra. He is also a member of the Chester Festival Chorus and Ensemble Deva, Kantos Chamber Choir and the Northern Ballet Sinfonia Orchestra, the National Youth Chamber Choir of Great Britain and the San Francisco Philharmonia Baroque Orchestra.

In his day-to-day life, Timothy teaches singing, musical production, DJ performance and the composition component of GCSE and A-level Music and conducts choirs at the City of London Freemen’s School. He also sang regularly as a lay clerk at Guildford Cathedral until the end of last year, and now performs on a freelance basis for choirs in and around London.

In the autumn of last year we were also delighted to be joined by Ian Miles as our regular practice pianist. For over 40 years Ian was a teacher of modern European languages. He is an accomplished organist, and for a number of years in the early 2000s led the Oxford Male Voice Choir.

We now have 9 weeks to work on our next Concert Spring: To Life on 25th March, which will be at St John's Roman Catholic Church, Horsham at 8pm.  Tickets will be available as usual via our website.

Looking further ahead we will restart after Easter on 13th April with our summer concert on 25th  June, also at St John's Church in Horsham.

We are delighted to announce our fourth concert of the 2022 season, Into the Light, a varied, truly spine-tingling and atmospheric programme of shorter unaccompanied music from both classical and internationally renowned contemporary composers.

Olivia has themed the programme around the summer sky, light and stars, and this beautiful collection of pieces takes the listener on a journey from night time into daytime. We hope that this will not only be a delight to the ears but uplifting for the soul, with some crunchy harmonies and varied melodies. Notably there are two pieces (not mentioned on the poster) by Palestrina and Praetorius featuring just our tenors and basses, with their warm and rich sound, and another featuring only the sopranos – a chance to appreciate fully their roles in the SATB line-up! I’ve also updated the website with some further information (gleaned from Wikipedia) about the composers. Their dates range from 1526 to the present day – so it’s a history lesson too.

For tickets, please click 'read more' below, and it will take you to the booking page on the website. 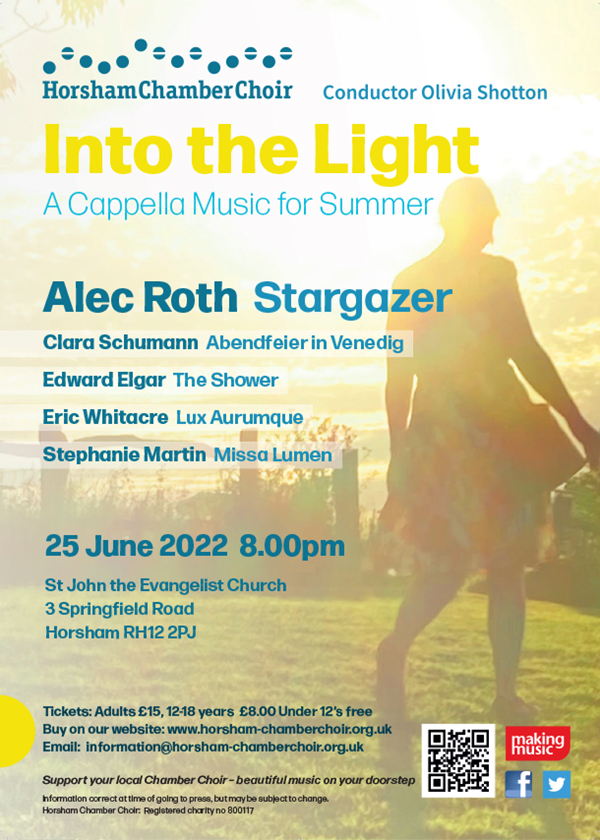 Welcome to our first Friends' Newsletter and an extra special welcome to any recently subscribed Friends.

We were delighted to see those of you who could come to our last concert on 2 April. Thank you, too, if you filled out one of our survey forms, it's really helpful to know how our publicity reaches you. I'm Jenny Knowles, a non-singer and wife of tenor Richard, and I look after publicity for the choir. This newsletter is a first, and we hope you like the format - please let me know if you have any comments or feedback.

Sign up for our newsletter to receive the latest news and event postings.