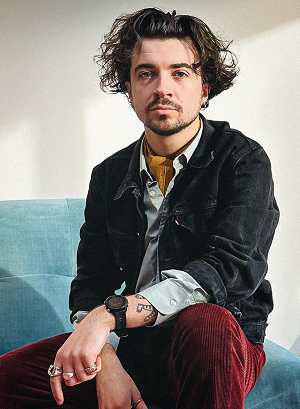 Timothy Peters graduated with an honours degree in music from Sheffield University. He is an accomplished conductor, tenor, and composer. In 2022 he was appointed Fellow of the National Youth Choirs of Great Britain and also as Musical Director of Surrey’s LGBTQIA+ Choir, Surrey Rainbow Choir. In January 2023 he joined Horsham Chamber Choir as its Musical Director. He is first and foremost a conductor of chamber choral music, but has also worked with larger ensembles, such as when he led two hundred and fifty singers from four choral societies in a performance of his composition The Golden Hour in Sheffield Cathedral, a piece commissioned by Classical Sheffield in 2019.
As a tenor soloist, Timothy has been featured on BBC Radio 4 and regularly performs for choirs and orchestras around England including the Exon Singers, Hallam Choral Society and Hallam Sinfonia, Bakewell Choral Society and South Yorkshire Symphony Orchestra. He is also a member of the Chester Festival Chorus and Ensemble Deva, Kantos Chamber Choir and the Northern Ballet Sinfonia Orchestra, the National Youth Chamber Choir of Great Britain and the San Francisco Philharmonia Baroque Orchestra. In addition he has made numerous performances as a recitalist.
In his day-to-day life, Timothy teaches singing, musical production, DJ performance and the composition component of GCSE and A-level Music and conducts choirs at the City of London Freemen’s School. Until the end of 2022 he also sang tenor  as a lay clerk at Guildford Cathedral, and now performs on a freelance basis with choirs in and around London.  To find out more about Timothy and his projects, including links to events and social media pages please visit his website at www.timothypetersmusic.com